I was always an enthusiastic voter. I voted as soon as I was old enough and was proud and excited to take my daughter to her first experience at the polls when she turned 18. Yes, I was enthusiastic about voting – until about the last decade. There have been several times I almost decided not to go to the polls because I’m fed up with the whole political scene. I am tired of my party offering up candidates that are an embarrassment. And I’m especially disgusted with the idea that I can’t trust that anyone is really telling the truth – about themselves, about other candidates, about the issues at hand. I used to like doing my research to ensure I was an informed voter. The process now just wearies me. So, what keeps me going to the polls? Here are a few thoughts that keep me motivated and I hope they will motivate you, too.

1. Voting is your right. We protect the right to vote by voting. 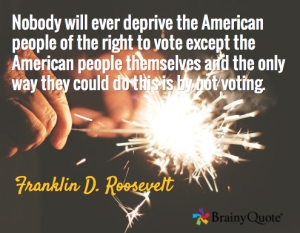 Don’t give up your right to vote.

2. Voting is your privilege. Insightful discussion is abounding on the idea of “checking your privilege” (see some great links below). The Oxford Dictionary defines privilege as “a special right, advantage, or immunity granted or available only to a particular person or group of people.”

The “check your privilege” movement is meant to … well, I’m not sure what it’s meant to do. In some cases it seems to promote discussion between privileged groups and those without said privileges. In other cases, it appears to be a quick come-back meant to stifle discussion by telling the one perceived to be privileged they have no right to speak on a matter because they have not experienced the hardships of the group most harmed by the issue at hand.

For the purposes of this discussion, I’d like to broaden the concept of privilege beyond the borders of the United States. Compared to many other nations, we are privileged with our system of government. Others, like those currently protesting in Hong Kong, are still fighting for the rights and privileges we take for granted.

One notion in the “check your privilege” concept, at least by some, is the challenge to use whatever privilege you do have for the good of others. This I wholeheartedly support. As US citizens, we should exercise our privilege to vote because it can impact the lives of those less fortunate both here and abroad.

3. Voting is your responsibility.  Voting is a civic duty that has a lasting impact on future generations. I have been most apathetic about voting when the choices come down to the “lesser of two evils” in my thinking, when there’s no one I can really support. But if you think about it, keeping the worst of two evils from taking prominence really can be turned into a motivator.

4. Voting is the credibility behind any complaining or protesting you’d like to do. I’ve been happy to see the “get out the vote” campaigns in the midst of the protests over the Mike Brown shooting in my St. Louis county, which includes Ferguson, Missouri. Now, I want to see a good voter turn-out as a result. I’m tempted to say all future protestors of voting age must wear their “I Voted” stickers to the next rally or not be allowed to protest. And, please, tell me you voted before you go into any kind of social media rant on the state of the world. Otherwise, I may be tempted not to listen to you at all.

Yes, I may be tempted to hold my ears while you try to speak if you haven’t voted at the end of the day, but I won’t. After all, one of the goals of this blog is to bring everyone to the table for good dialogue. So, if you don’t vote, maybe we can start with that. Why don’t you vote? What would it take to get you to vote? And if you are an enthusiastic voter, or an “I’ll still force myself to vote” person like me, do you  have any reasons to add to my list?

Further reading to get you thinking about the idea of privilege:

Looking for a specific topic?