In a previous post, I suggested we start sharing stories of positive experiences with people of other cultures and color to help dispel the fears that drive so much of the prejudice we see. A Facebook post by Kelly Spann is just the type of story I was hoping for and she has given me permission to share. I pray we all actually look for opportunities to share love and common ground. These are the things that will help our community, our country, and the world heal. Here’s Kelly’s story: END_OF_DOCUMENT_TOKEN_TO_BE_REPLACED

In the aftermath of the Ferguson riots last night, a young mama of a beautiful infant boy has posted several things on Facebook lamenting – seriously lamenting, bitterly lamenting, heart-wrenchingly lamenting – the idea that her son’s life does not matter in this crazy world. After praying and crying over her posts, I tried to formulate an encouraging response, but I’m not sure it was enough to convince her. It read:

I’m so sorry you hurt in this way. I am sorry we live in a world where these feelings are fostered by those who hate. I pray you will see that your sweet baby’s life does matter to many. It matters to those who are working tirelessly to create change and promote understanding.

I in no way want to downplay your real concern that this message needs to be heard. That people need to speak out against injustice. That too many are indeed callous towards the lives of others. That there is much work to do to combat hatred and bigotry. I just want to be one voice to bring you hope in this despair.

Keep posting pictures of your beautiful baby boy. Keep letting others see your joy in being his mommy. This is a bright spot in an ugly world and often makes me smile as I scroll through my feed. You keep spreading good. I’ll keep speaking on your behalf. And prayerfully, your little boy will grow up in a better world than the one we have experienced.

The labyrinth at Trinity Episcopal Church, where I sometimes go to find inner peace.

My husband will be very happy to see I’m admitting this in public. I have a hard time saying I’m sorry when it comes to an argument.

It’s not that I don’t think I’ve done anything wrong. I’m a firm believer that both sides have usually fallen into some form of error when embroiled in an argument – if not from the outset, most definitely once the battle begins.

And it’s not even that I don’t feel sorry for something along the way. At the very least, even when I feel like I’m 100% correct in my original point of contention, I’m always sorry we’re fighting. And I’m sorry the other person has been hurt in the process of airing out our grievances.

Here’s where my hang-up with “sorry” comes in: I can’t stand the thought of it being issued prematurely. I refuse to make an apology until I feel like my voice has been heard. I dislike the idea of a peace treaty that comes from either of us not having said what we’re really thinking and feeling. For me, a peace that stems from sugar coating or backing down from a perceived truth is only temporary. The issue will inevitably come up again because root issues were never really resolved.

I share all of this, not because I think I’m right or justified in this approach to conflict mediation. Rather, I put all this out on the table as an introduction to processing the quote from Jean Vanier. Here, I will share how I am working through the challenges presented in the quote, with the hope that the lessons I’m learning will also be seen as applicable to those who are praying for peace and justice in Ferguson, Missouri and beyond.

The quote really challenged me to think through the idea of what I’m willing to lose in an effort to pursue peace. Now, I’m still working through the processing of this, but here’s what it looks like so far:

Contemplating the loss of certitudes – Am I willing to admit I may be wrong? If I am, then the resulting action would be to listen more closely to the person on the other side of the debate. Instead of only listening for signs that they hear my point of view, I will listen more closely to theirs. What hurts are they expressing? What feels like injustice to them? What valid points are they bringing to the table? Instead of only seeking to be understood, perhaps I should ask questions about their history and what has led them to the conclusions they are expressing.

Contemplating the loss of comforts that shelter and define me – Am I willing to get out of my comfort zone and explore this issue from the perspective of “the other”? Am I willing to probe my own heart and see why I think saying “I’m sorry” is equivalent to saying, “I’m wrong”? Why does the withholding of my apology bring me comfort and a sense of security? Am I willing to give up that security in order to pursue peace? Why must the apology only come at the end of the discussion? Perhaps mingling in a few sincere apologies along the way would bring a level of comfort to the other person and foster truer, more effective dialogue. After all, I’m not just sorry after they’ve acknowledged my points. I’m sorry at various points in the discussion, so why not throw it out there as it’s occurring instead of waiting for them to earn it? (Darn! This is a difficult thing to admit.)

Contemplating the loss of hurts that shelter and define me – As difficult as that last area of contemplation was for me, this one is even harder. Am I willing to let go of my hurts? Holding on to my hurts shelters me from being hurt again. Will I risk all that in order to restore relationship? How does my hurt define me? Not just this hurt, but all the past hurts that feel similar to this one. Is it fair to bring all that baggage into this current conversation? It seems reasonable to allow both sides to acknowledge those hurts as reasons for their current stance on the issue and to promote understanding. If, however, I’m unwilling to release my grasp on those hurts … well, then I’m still in self-preservation mode and not yet working towards relationship preservation.

“Peace is the fruit of love, a love that is also justice.” In seeking peace and justice, which of the losses is hardest for you to take? 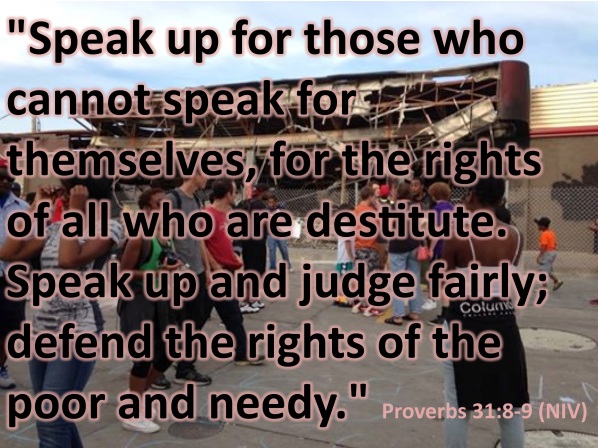 Here are their responses:

“We’re all in this together.”

My mind and heart are stirring following this event, and I will be writing more on this later. But for now, I want just give some thoughts for those who are praying with us here and in our Facebook prayer group.

As you pray, you might want to think about these things:

The table – It can be used for meals, meetings, games, conversation, counsel or even as a make-shift writing spot for those like me who cannot always find the top of their desk (or just prefer to head out to a coffeeshop to write). It is my hope that this blog will serve as a table where we can gather for each of these purposes. So, here are the kinds of things I’ll be posting:

Meals – We all need nourishment for our minds, our bodies and our souls. Through music, art, devotions and challenges to our thinking, may we all be well nourished.

Meetings – I am a certified Grip-Birkman coach and have a passion to help people discover their gifts, personalities, intellectual styles, and occupational motivations. I particularly like to hold team-building seminars and foster appreciation for the fact that an effective team requires people with different ways of thinking and doing. See more at www.gripbirkman.com.

Counsel – Life is messy. Why pretend it’s not? I am a pastor who avoids the idea that there are quick fixes to tough problems; no one here will be told to “just get over it.” Instead, you’ll find links to resources and good advice from others who have been where you are. Those who are suffering and those who are overcoming are welcome to this table to share their life experiences.

Games – We all just need to have fun sometimes. “A merry heart is good medicine” (Proverbs 17:22). You’ll find healthy doses of humor here.

Conversation – I believe the best solutions come when we do life in community. Whether we’re looking for answers to global problems, theological debates, or just day-to-day conundrums, we’ll take a look at varying opinions and develop an ear to really listen and hear what others think and feel about the issues at hand. Open-mindedness and civility will be part of our core values, but that doesn’t mean we’ll tip-toe around the issues.

Writing desk – “Lisa Womble writes hope-inspiring true stories that draw people closer to God and closer to each other.” This was my answer when instructed to draft a one-sentence mantra to keep me focused on the primary goal of my writing. I’m currently working on a book about my friend who is in witness protection. I will be sharing excerpts and reporting on my progress here. It is a powerful story of transformation. But not all stories have to be this dramatic to be powerful. Story sharing is a great way to get to know each other and my aim for this blog is to create a space where we come together to share our stories.

Looking for a specific topic?